GAME SETUP AND HOW TO PLAY

We use Jay’s Discord server for voice chat. The #General voice channel is used for audio during the game.

We use Foundry VTT for the visual component of the game.  The link to the gameboard can be found at the top of the #lfl-updates channel in Discord.

If you have any questions on how to use it, feel free to ask and we’ll all be happy to help. You are responsible for your own character sheet; I won’t be policing it or checking it over unless you ask me to.

In addition to using Discord for voice audio, we also use it for chatting. There are 4 channels under The Long-Forgotten Light:

For the most part, we use all the standard DND rules, but there are a few tweaks. This is a living document and may change as we progress in the game, but not without a chat about it at the beginning of a game session.

https://5e.tools is a huge help for learning about your own class and race, as well as pick spells.

If you are so inclined, there are a variety of great YouTube videos on DND 5e. I highly recommend The Dungeon Dudes.

THE STORY SO FAR…

We started fleshing out characters and tentatively have 3 small guys and a dook.

The Great Dale which houses the forest of Lethyr, The Mucklestones, and more is a scenic area known for it’s druidic history. There are pillars of former cliffs that still stand among the trees of the forest, beautiful lakes, and highly sought after vacation destinations for both the elite and high-middle class.

With tourism booming in the area, there are also a fair amount of hospitality and service workers to tend to these visitors, as well as a helping of small time crime kept mostly in check but it does still happen from time to time. The prime tourism calendar for the area spans from late Tarsakh to the end of Eleint, at which point the region essentially shuts down for the year. The month of Eleint is the most popular time of the year before it goes completely dead.

There’s vacationing estates on the lakes primary, but the Forest of Lethyr is also a big attraction because of the stone trees (which are just cliffs that have eroded into tall skinny columns). There is hiking and sightseeing for sure, but there are also recreational activities organized by the local community. Everything from exotic horse riding shows to karaoke contests, silly camp games, swimming, dancing, etc. It’s also a bit of a networking event to an extent. You’re not really paying for the activities as much as the company with which you’re participating in them with.

We’ll be starting right after the tourism industry begins it’s break, but you guys would have likely been imprisoned while it was still going. 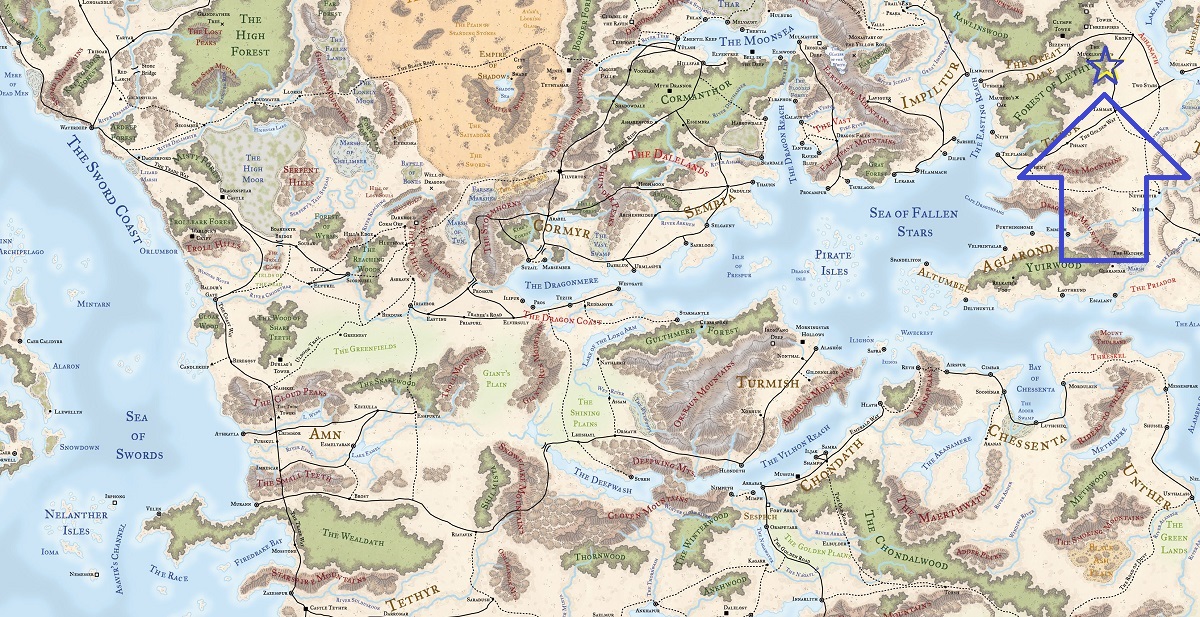 The group has all found themselves in a jail holding sell for minor crimes and has been sentenced to community service for the Oerladda Estates manor at the edges of the Forest of Lethyr, pictured at the top right of the Faerun map shown here.

None of the party members knew each other before their time in the jail cell, but they got to know one another while serving out their short sentence.

Scrambles was on the run from the authorities after committing theft when he bumped into Eaq on the street. He hid his stolen goods on Eaq attempting to evade arrest, but he just ended up getting them both arrested.